Universal’s Character Race Character Guests Revealed – Running Universal’s inaugural Epic Character Race 5K and 10K weekend will take off at Universal Orlando Resort on February 1 & 2, 2020 – but it wouldn’t be complete without a gaggle of larger-than-life characters cheering on the runners along the way.

The first-ever Epic Character Races will give participants ages five and up the unique opportunity to run surrounded by some of the most beloved characters in pop culture. Runners will be championed by mischievous Minions from Illumination’s Despicable Me and Minions franchises, Velociraptor Blue from the Jurassic World franchise with her Raptor Expert, the world’s favorite ogre Shrek and his friends from the DreamWorks Animation films, the heroic Autobots and villainous Decepticons from Transformers and more. If runners need a pit-stop along the routes, many of these characters will be available for fun photo opportunities – making Running Universal’s Epic Character Race both an entertaining event and a race to remember.

Runners will also experience the exhilaration of running within the immersive theme park environments of Universal Studios Florida and Universal’s Islands of Adventure – recently named TripAdvisor Travelers’ Choice for #1 Amusement Park in the World for the fifth year in a row. 5K runners will make their way through the Universal Studios Florida theme park – including the iconic scenery of New York, San Francisco and other areas of the park – as well as areas located toward the front of Islands of Adventure, including the mystical Port of Entry and Seuss Landing.  Runners of the 10K will experience a route that takes them throughout both Universal Studios and Islands of Adventure theme parks, including the sprawling lands of Jurassic Park, Toon Lagoon and more.  A full course map will be available on www.UniversalOrlando.com/RunningUniversal in the weeks ahead.

Registration is open for Running Universal’s Epic Character Race, with standard pricing beginning at $82 per person (plus tax). Runners can choose from multiple options for an unforgettable weekend, including 5K or 10K race registration, VIP race upgrades – which includes an extra-special character meet-and-greet and a triumphant post-race breakfast – and weekend package options exclusive to race participants, featuring hotel accommodations at the all-new Universal’s Endless Summer Resort – Surfside Inn and Suites. Runners can also save on admission to Universal Studios Florida and Universal’s Islands of Adventure to celebrate their racing achievement with their friends and family within the most entertaining theme parks in the Universe.

Training continues but the only way to lose this race is to not show up. For more information and to register for Running Universal’s Epic Character Race 5K and 10K weekend at Universal Orlando Resort, visit www.UniversalOrlando.com/RunningUniversal.

Universal Studios Hollywood is also hosting its next “Running Universal” race featuring DreamWorks Animation’s Trolls on Sunday, April 26, 2020 with a 5K, a Kids’ 1K and a 10K run. For information about “Running Universal” events in both Orlando and Hollywood, go to www.RunningUniversal.com. 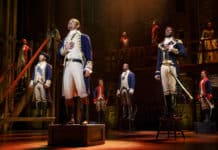 Mommy and Me Class

I Have a Dream at Herndon Library